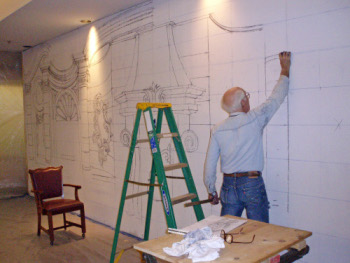 With Kendal's dining renovation comes a temporary work of art. This is how one of Kendal's newest residents, Bob Cothran, feels about the current construction occurring at Kendal. For several months the dining rooms at Kendal have been under construction. In November, a 10 feet high, 28 feet long blank wall was erected to act as a barrier between the lounge and the final leg of the dining room construction.

When Bob Cothran spotted this blank wall he was in his glory. He pitched an idea to the residents and suggested that he transform the blank wall into a mural. Cothran, a retired theatrical scene designer, thought it would be fun to paint a trompe l'oeil mural which translates into “fool the eye”. 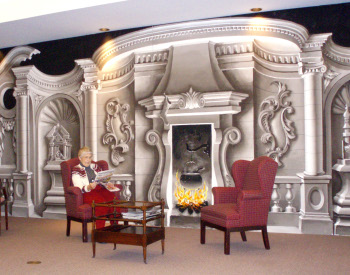 He primed the wall the Friday after Thanksgiving, and the next day he and his wife Rosalyn snapped chalk lines to form a grid of 1-foot squares. Using the grid, he sketched out his picture, then began painting. He completed the 280 square feet master piece right before Christmas - and what a gift and conversation piece this extraordinary mural has brought the community.

Having moved here recently from Knoxville, TN, the mural helped both Bob and Rosalyn ease into life at Kendal. He said that the mural enabled him to interact with people then return to the wall with its grid lines and feel right at home.

Art historians, gallery goers, and museum curators eagerly call attention to Bob's astonishing handling of the Late Baroque scenographic style of Salvatore Ricci, and how in his Christmas gift he has balanced Botticelli's “Adoration of the Magi” on the left with the Menorah on the right. One suspects that if Apelles' birds found their way into Heiser, they would gorge on the fruits and nest down safely on the massive cornice.